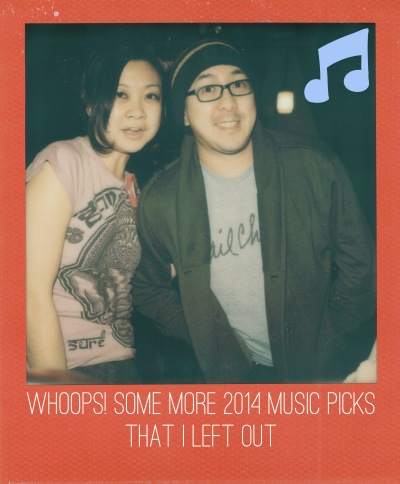 I’m not done with 2014 just yet. There were some notable musicians and bands that came out with album in 2014  as well as going through some of the Ottawa bands that released materials last year. My year end countdown is based on albums as singles don’t really count. Here’s my short summary on the leftovers.

I’m going to start with Scary Bear Soundtrack. Gloria Song, who’s from Ottawa and residing up in Nunavut. The band had some member changes over the time and change of location but it had a lot of exposure in 2014.
The band got entered to CBC Music‘s Searchlight contest and has made it to various year end countdowns and picks from radio programs and music blogs.

Here’s this track via SoundCloud, The Longest Night.


Other Notables
I realize that other radio hosts and music blogs have mentioned Mo Kenney to their year end picks. I totally forgot about Kenney releasing a follow-up from her 2012 self-titled album. In My Dreams was released on September of 2014. Joel Plaskett produced the album and there’s more of an edgier tone to the second album.
Here’s this track via SoundCloud, Telephone.

If you’re into electro synth pop, Allie X came out with Prime.

Expecting a new album to be out in 2015 is Grimes and this song was released in 2014. Originally a song for Rihanna, Grimes decided to use the song herself. Very different sound from her.
Here’s the song, Go.

Ottawa Music
There were various bands from Jeepz, The Yips, New Swears and Kalle Mattson, just to name a few that released new materials in 2014. Check this link from Ottawa Showbox of their top local releases of 2014. The ones I want to cover are two Ottawa bands that use famous Canadian people.

First up is Silkken Laumann, the beginning of 2014 saw the release of Not Forever Enough. The band consists of The Acorn’s Rolf Klausener and Pat Johnson. The third member is Adam Saikaley. Their music is full of synch and techno along with catchy beats.
Here’s this track via SoundCloud, On The Mend.

The next is Roberta Bondar, the band consists of Lidija Rozitis, Alex Maltby, Gary Franks, Tyler Goodman. The band were in the news last year that they were told to not use the name, Roberta Bondar. Aside from that, the band released an album on July of 2014 called Caustic. Their music has that heavy, Grunge 90s style to it.
Here’s the track from the same album title.

The Life And Times Of A Petite Abroad