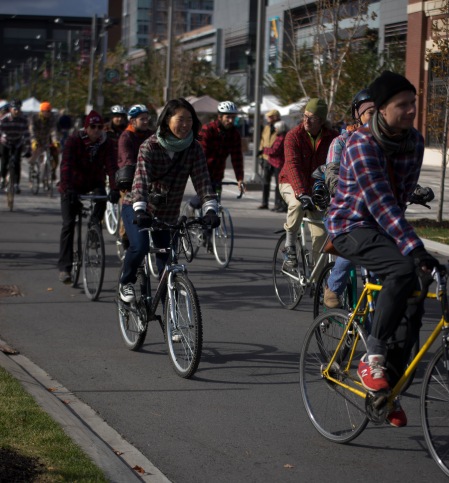 It was a chilly and cold Sunday morning as I rushed over to Lansdowne Park for the 4th annual Plaid Parade. It’s an event done by XO Velo and to showcase the bike fanatics in decking out on their plaid clothing. It’s my first time checking out the event and sorry, I didn’t use a bike nor take part in the parade as I decided to take fun photos. The previous bike parade was held at a different location. Lansdowne Park was a nice location and there were the farmers market happening as well. It’s become a lively place to be at.

That was a nice way to spend Sunday morning checking out the start of the bike parade. You check out the photos over at Flickr by clicking HERE.

It was a chilly and windy Saturday afternoon in downtown Ottawa as I attended the Ottawa’s Music Scene // Class of 2015 group photo. There was a similar one which happened in Toronto not too long ago and why not have one for Ottawa as the music scene has been unique and creative.

There’s been a diverse genre spread throughout the music scene in the Nation’s Capital. It’s like a who’s who of the music scene and more like a six degrees of separation as the community is always interconnected.

At the photo shoot, there were bloggers, musicians and fans congregating for the group photo. As usual, it was great seeing G.Grand and Scary Bear Soundtrack. Danielle Allard, Malak and others who I might forgot their name as they were part of the fun photo shoot.

The photo above was shot on the Polaroid camera using The Impossible Project film and it didn’t turn out as great because of the cold temperatures.

You can check the photos over at Flickr by clicking HERE.
END_OF_DOCUMENT_TOKEN_TO_BE_REPLACED

It’s one of the rare times I would write about Canadian politics. Wednesday night at Babylon Nightclub was a free event of live music and getting people informed to vote for the upcoming Canadian election in a non-partisan way. The federal election is less than a couple of days away and so far, there has been a bigger turnout for advance polls during the Thanksgiving weekend and interest among the political parties vying for people’s vote.

The event, Ballads for Ballots was hosted by Ottawa Showbox in conjunction with Beau’s All Natural Brewing & Gallery Recording Studios as they brought the best in the Ottawa music scene. The three acts ranged from Folk to Hip-Hop to Pop. First to perform was Malak, who’s from the US and now based in Ottawa. Her music ranges from Jazz, Opera and Pop. Second was Ottawa’s own Jim Bryson and it’s pretty self-explanatory about him as I written so many times about his music. He did talk about politics and the place he’s living at. Last but not least was G.Grand as he’s become prominent in the Ottawa Hip-Hop scene. He made some accomplishments as he performed two times on different days at the 2015 edition of RBC Ottawa Bluesfest.

There were speeches by Jenn Jefferys (freelance writer) and Elizabeth Gray-Smith (iPolitics) as they told the crowd to get out and vote on October 19th and get their voice heard. As well, there were booths by Samara Canada and Elections Canada to show how to vote and practice come voting day.

It was good event and great to see people I know around as usual. Good job on Ottawa Showbox for holding the event as well as the sponsors that helped out to do raffle draw.
You can check the photos over at Flickr by clicking HERE.

END_OF_DOCUMENT_TOKEN_TO_BE_REPLACED

Prior to going to Beau’s Oktoberfest on Saturday, I went to T&T Supermarket (Ottawa location) and stumbled into this Coca-Cola flavour. Imported from Japan, it’s Coca-Cola Life. I was pretty curious because of its green packaging and not knowing much on it. There’s some Japanese words on it which is unique than the Cokes in North America.

I had a taste on a Sunday and to my surprise, it didn’t taste very sweet and very rich. From what I read on Wikipedia, it uses sugar (less amounts than normal Coke) and stevia instead of corn syrup/fructose used on original Coca-Cola. It’s somewhat in-between Coca-Cola Zero. I would think that it would taste like Mexican Coke, which I tried at El Camino awhile back but it’s different in tasting.

There you have it. Not sure if T&T will restock more of it as I took the last bottle. The price goes for $2.79. It’s pricey than the usual 500ml bottles, which has been the new norm in 2015 as Coca-Cola is lowering calories in their products. Check the photos below.
END_OF_DOCUMENT_TOKEN_TO_BE_REPLACED

It was a chilly and windy Saturday as I went to Beau’s Oktoberfest 2015. The event was held at the Vankleek Hill Fairgrounds in Vankleek Hill, Ontario, it’s further east of Ottawa. It’s about an hour’s drive to get there. The event is now in its seventh year.

There’s lot of activities from midway games to learning about beer and food. The popular had to be the Craft Haus as it had various craft beers from Ontario, Quebec and a few from the United States. I didn’t drink any beers but my dad and brother did.
There were the food tent section from popular eateries in Ottawa like Pressed, two six {ate} and a few elsewhere.

The concerts which I didn’t get to check out ranged from Yukon Blonde to F’ed Up to the 2015 Polaris Music Prize Shortlist nominee, Alvvays. It’s great to see a festival showcase Canadian music.

It was great to bump into some friends at the event. Later in the afternoon, there were a lot of people and lineups for certain foods like the pretzel. At least this year wasn’t raining as I attended last year and regret having to wear shoes.

Overall, Beau’s definitely made a fun event for families and young people alike.
You can check out the photos over at Flickr by clicking HERE.

The Life And Times Of A Petite Abroad