We know, we know – there are enough jokes out there about Snowmageddon and Snowpocalypse and …Winterfell.

But seriously, this snow though…It would give even the Night’s Watch a run for its money.

Still, we did our darnedest to pull together a good show yesterday. This post is a little delayed, since Lenny and I were stuck shovelling our driveways all afternoon, but here it is – our recap of this week’s edition of WildWorks.

Some pretty exciting news to start things off – The RBC Royal Bank Bluesfest lineup was announced yesterday, and we were reaaaal keen when we saw some of our favourites on the list. Big acts include Björk, BB King, the Dixie Chicks, Rush and Wu-Tang Clan. Personally I’m excited to see Passion Pit, Mother Mother, Zeds Dead, Camera Obscura and Bahamas.

END_OF_DOCUMENT_TOKEN_TO_BE_REPLACED 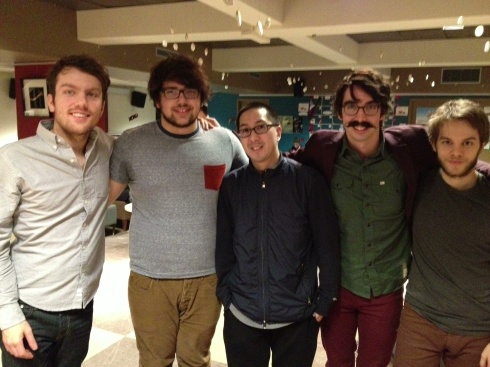 Hey friends, this is Candice writing a quick recap of today’s edition of WildWorks.

So busy, busy show today – not only did we have a double dose of interviews with bands Young Rival and The Elwins, but today was also Lenny’s birthday! Happy birthday, friend! Here’s to another amazing year ahead and all the DAVIDsTEA your heart desires. : )
The photo shown is Lenny with The Elwins, after the interview.

On today’s show, we played a few tracks from artists and bands that are competing in CBC Music’s Searchlight contest. CBC is looking for Canada’s next big thing, and the winning artist/band will get a sweet $20,000 in music-related equipment from Yamaha. The list of the top 20 acts is slated to be released Feb. 25.

END_OF_DOCUMENT_TOKEN_TO_BE_REPLACED

Young Rival, which opened Friday night at The Black Sheep Inn for Plants and Animals, spoke to WildWorks just before their live show. The Hamilton, Ont. trio of frontman Aron D’Alesio, bassist John Smith and drummer Noah Fralick chatted with us, beers in hand, just before taking the stage.

Jangly guitars, classic rock nostalgia and all the bright tones of the impetuosity of youth – it seems like those would be the makings of a credible indie rock act. And all the more so in Canada, a fabled hotbed of the indie and alternative rock genre.

Young Rival brings all this to the table and more – and they have done, for roughly 10 years, first as The Ride Theory and now under the moniker Young Rival.

They give a kicking live show, they’ve been on the Canadian indie scene for about 10 years, and their video for the track “Two Reasons” just made the shortlist for the Prism Prize, a $5,000 music video award for Canadian artists with the clout of Drake, Grimes and Arcade Fire.

And after dropping their album, “Stay Young,” in October 2012, and finishing the Quebec leg of their tour this month, you’d think the band would be getting a little more recognition for their efforts. So what’s the problem?

“I wish we knew,” said Smith with a sheepish laugh. “If you have any ideas, you can share them with us.”

END_OF_DOCUMENT_TOKEN_TO_BE_REPLACED

It was a chilly but wonderful Saturday as the lions and dragon roamed through Ottawa Chinatown for the annual Chinese New Year parade. Also on hand were other drummers and twelve animals from the Chinese zodiac.
This year was unique as it was in conjunction with Winterlude/NCC.
For myself, I was on the cymbals and the tail of the lion. The photo shown had Ottawa mayor, Jim Watson giving the red pocket to the lions under the Chinatown Gateway. It was definitely the popular spot as crowds waited for the lions and dragon to come through the part of Chinatown.

Don’t forget to check some of the photos I took during the parade.
Here’s a short clip via Vine at this link.

Overall, the weather was great and fun watching families and their kids be happy for the occasion. I forgot to mention that the seventh day of Chinese New Year is everyone’s birthday.
END_OF_DOCUMENT_TOKEN_TO_BE_REPLACED

Gong Hei Fat Choy again!
It’s an annual thing to do the Chinese New Year edition of the radio show. I finally got Candice to join me for this year’s occasion as I previously wanted her to join me on the 2012 edition of the CNY radio show but she was busy with other things. This year made it happier for myself as we got to talk about the traditions and festivities of Chinese New Year.
As usual, we played the Chinese music related to the holiday, no matter how we scoffed at the cheesy tunes played, it can be similar to Christmas music being played non-stop. There were a few “snake” songs played as this year is “the year of the snake.”

The photo shown has us holding Chinese New Year goodies and decorations. It’s the second year to bring the addictive rice crackers and cannot stop eating those.

Aside from Chinese New Year, we also played some love songs for Valentine’s Day. It was pretty jam packed to playing CNY and V-Day songs and both themes have become a yearly staple for my radio show. For the Valentine’s Day show, I would always play a couple of Cantopop love songs and one in particular has been played on V-Day, which happened to be 情人 (translated as Lover) by Beyond.
To my own astonishment, Candice did not know Firestruck by Young Galaxy. I thought she heard songs from their 2009 album, Invisible Republic.

This week’s Wild 10 Countdown has Hayden at the top spot. The summary and other songs played are over at this link.
You can check the playlist from the CNY & V-Day show over at this link.
Lion dance performances have slightly calmed down after Monday and anticipating for the parade in Ottawa Chinatown this Saturday afternoon. Hope to see you there.

END_OF_DOCUMENT_TOKEN_TO_BE_REPLACED

Kung Hei Fat Choy!
What a way to start Chinese New Year for 2013 with a lion dance performance at T&T Supermarket, Ottawa location. Although, my lion dance troupe had done a few performances since Thursday leading up to Chinese New Year, it’s been exciting to see people be happy to watch the colourful lions.
It’s been wonderful having two small lions and three big lions for the big occasion.

The performance at T&T was pretty crazy as crowds were getting packed and we performed for about 30 mins around the supermarket. It was quite a frenzy for the guy dressed up as Cai Shen. He was giving out the red enveloped and lots of people were grabbing the red envelopes like hotcakes. That was quite a moment.

There’s one more big performance and it will be on Saturday (Feb. 16) for the New Year Lion Dance Parade.

Happy year of the snake!
END_OF_DOCUMENT_TOKEN_TO_BE_REPLACED

In case you missed it, today was the SOCAN edition of WildWorks. SOCAN, the Society of Composers, Authors and Music Publishers of Canada, is giving revenues to songwriters and performers who are featured on radio shows across Canada this week. So we decided to play all Canadian content this week, and the results were, of course, awesome!

Today’s mix included our personal favourites, like Ohbijou and Basia Bulat, but we also heard some distinctly Canuck-esque tunes like “Canadian National” by Inlet Sound and “The Halifax Commotion” by Ottawa’s Hilotrons. It doesn’t get any more Cancon than that!

Also stay tuned for next week – not only are we doing a Valentine’s Day-themed show, but it’ll also have a Chinese New Year-inspired vibe. And we all know which is the more excellent holiday.