Trying to hold back tears as the end of April sees friends and people leave Ottawa to various places. It was an opportunity to see Lauren Bridle for the final time on Monday afternoon. She is finished her studies at Carleton University and going back to her hometown of Toronto. It’s been a tremendous four years having you come on as a co-host on my radio show. You got exposed with the Canadian and general indie music that I got to play as well with the classic Cantopop music that I foolishly played within my radio show. I’m glad that you were able to tolerate it. It’s a no-brainer that you got to meet and interview a particular musician and a few bands who are based in Vancouver, British Columbia.

Unfortunately, the photos I used from The Impossible Project didn’t turn out too well. I’m still having trouble setting the bright/dark levels from the Polaroid SX-70 camera. The funny photo shown above was basically a selfie within a selfie. I actually goofed up as I didn’t take the photo from my iPhone. Got to love my Hudson’s Bay phone case by Gelaskin. End the slight shameless plug.

As a parting gift, I gave her a popular Korean drink called Soju. The one I got is called Charm Soju and it’s available at select LCBO locations. You will see a photo from below. I’m not big on drinking and decided to give something unique before she leaves off.

Lastly, all I can say that even though I didn’t get a Journalism degree but felt like I was the teacher when I brought you into wackiness of campus community radio. We also enjoyed the same interests with tea (DAVIDsTEA), a bit of technology (Apple) and a bit of fashion. You did get to meet some great people during our time on radio. We never made our goodbyes on the radio. This blog entry is my goodbye to you.
Good luck to you in your endeavours and we will meet again in the future.

END_OF_DOCUMENT_TOKEN_TO_BE_REPLACED 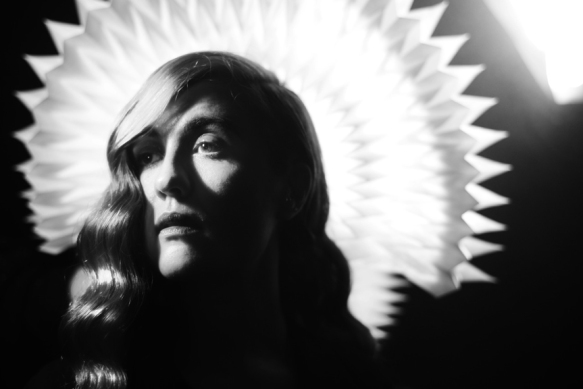 It’s been awhile I have written something about music. For those who haven’t been in the know of things, I no longer host a weekly radio show due to differences with the campus community radio station. They haven’t dealt with me on the issue and that’s all I will say for the time being.
Onto the music side of things.

The kind folks at Pop Montreal and Arboretum Festival will be holding a concert at Mercury Lounge on April 30th. It’s Jessy Lanza from Hamilton, Ontario. Her music is described to be electro-R&B. Lanza released her debut album, Pull My Hair Back on September 2013 and released by Hyperdub, a London, UK based record label. Reviews from Pitchfork have been favourable so far.

Her music can be similar to Grimes and Purity Ring as it resembles the use of electronic, synth pop music. There seems to be an influence of 80s new wave music to it as her tracks are very infectious to listen and dance to. One of the tracks that stands out is Keep Moving.

Since the release of her debut album in 2013, Lanza has been getting a lot of exposure and coverage. She played at festivals like Pop Montreal and performed throughout Europe.
She was one of the finalists of the second annual Prism Prize for best Canadian music video. Her music was Kathy Lee (video posted below). Her music video joined the likes of Arcade Fire (Afterlife was the winner), The Belle Game, Shad, Drake, and Young Galaxy, just to name a few.

The show presented by Pop Montreal and Arboretum Festival at Mercury Lounge on April 30th will have Ricky Eat Acid as the opener. Doors open at 7pm, show time at 8pm and admission is $15 at the door.
Be prepared to dance throughout the concert.

Lastly, speaking of Arboretum Festival, they were listed as one of Canada’s Top 10 Summer Festivals, according to CBC Music. Kudos goes out to them as one of the rising festivals in Ottawa.
Have a great week!

END_OF_DOCUMENT_TOKEN_TO_BE_REPLACED

It was a nice Friday afternoon and it was an opportunity to go out to St. Laurent Centre for Call It Spring‘s newly renovated store at the mall. The reason for dropping by was because Grace of 613 Style was the host of the party. Call It Spring is a Canadian retailer of men and women’s shoes. The party started at 5pm and it consisted of a live DJ, a slushie machine, a selfie station, candy and nail bars. I did take some candies before they were snatched up.

I was somewhat tempted to get shoes as they a selection for 20% off. I already have enough shoes and sneakers. I was there to say hi to Grace and also take some instant analog photographs by The Impossible Project. I finally got to shoot using Impossible’s 600 Film in B&W. I was reluctant to try B&W films but didn’t realize how artistic and unique it can be.

To my own surprise, there was a photographer I met once at Ottawa Fashion Week and it was nice to hang out and chat about photography. Don’t forget to view some of the photos below. Lastly, check 613 Style as they have more photos from the event. I’m in a few photos over at the site.
Have a great weekend!
END_OF_DOCUMENT_TOKEN_TO_BE_REPLACED

I was convinced by a good friend that I should check out Lainey Lui of Lainey Gossip and co-host of The Social on CTV at Chapters in downtown Ottawa. She was at there to promote her book, Listen To The Squawking Chicken: When Mother Knows Best, What’s A Daughter To Do? A Memoir (Sort of). Such a long title as it’s a memoir about her life and family (mainly her mom) with humour added.

What struck me about her is that she’s raised in a typical Chinese family living in Canada. It reminds me of how my mom is like but really depend with one another. Chinese families can have wacky dynamics ranging from the annoyance to being supportive in times of need. I felt like I can relate to her because it’s how Chinese families are raised through a unique cultural setting in Canada.

As I’m blogging, my brother was reading out some parts of the book and laughing like crazy. Quite distracting as I concentrated typing this entry.
I can say it’s definitely a good read for anyone who likes memoirs and humour but it’s not for all ages as they’re some profanity.
Even though I’m not familiar with her works on TV and blogging, I should pay attention to her stuff from time to time.

Overall, I had a good time checking her out in person and usually a surprise to see another friend also go to the book signing event. It’s always nice to be cheered up and go out to certain events like that.
END_OF_DOCUMENT_TOKEN_TO_BE_REPLACED

Prom was all the rage this weekend and it’s not the high school type. My former colleague had her prom, Journalism style and she’s finishing up her studies. Elsewhere, I had the opportunity to check out PROMdemonium, held at the Glebe Community Centre. It’s their sixth year holding it and was sold out.

What is the event? PROMdemonium is a fun-filled event and is a fundraiser for local communities. As their website states, it’s a radical, community-oriented, gender-bending, bike-loving, enviro-humping, queer-diggin, slow dancing, big dress wearing prom that you never had. People reliving their high school prom but they can dress extravagantly and elegantly as possible.
Funds to PROMdemonium goes out to causes and organizations which bring out initiatives in social, economic and environmental justice.

It was my first time attending the event and I was there taking photos and carrying two cameras. One was a DSLR camera and the other being a Polaroid. It’s nice to see people be surprised in getting an instant photo. I posted a photo over at my Facebook Page. I didn’t expect to bump into people I know and be mistaken to another person. There was some great music played and it ranged from the classics of the 80s to the present. There was Drake played at the prom and some could groan about it. Photos from the event are posted below.

For those who know me, I rarely dress nice as it was prom, I attempted to do selfies and slightly failed at it. You will see it below the photo section. I have been enamoured with products from Hudson’s Bay very recently. I’ve been liking their famous multi stripe. Before heading to the Glebe for PROMdemonium, I went to Hudson’s Bay and picked up an iPhone case by Gelaskins and a Chambray multi stripe bow tie. As least, I was being fashionable.

Overall, I had a great time and I’m slowly getting back into the Ottawa events scene. To whoever got the Impossible photos, hope you liked them! END_OF_DOCUMENT_TOKEN_TO_BE_REPLACED